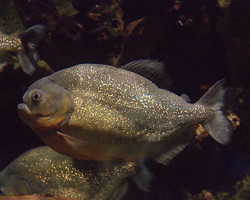 Despite being extremely ferocious predators many people keep piranhas as pets. These primitive creatures have been knows to eat entire animals  in a matter of seconds, sometimes their prey are still conscious with half of their body missing! They manage this by working as a team. The moment Piranhas smell blood they literally cannot control themselves and a feeding frenzy starts. They are the most aggressive and dangerous fish managing to eat animals many times their size.

Piranhas are found in the Amazon in South America and are quite sensitive to temperature fluctuations, especially if water gets cooler. Some species can be kept on their own but most like to be kept in schools. Did you know the biggest school recorded in the wild was three hundred! The most aggressive piranha species is the red-bellied piranha, they have caused the most human injuries and can grow up to a foot long. Hence the name, they have a red belly and a grey and black body with silver speckles on it.

Most fish in the Amazon are egg layers and Piranhas are no exception. They spawn in the rainy season and some species even build nests, which range from a shallow bowl in the gravel or a clump of floating leaves. The female will lay several hundred to four thousand eggs, however, this is less likely if they are kept in an aquarium and also depends on the what species. It takes the eggs approximately four days to hatch into fry and weeks for the eyes to the fry to develop along with their scale and sharp teeth. Soon enough the fry will be able to eat seeds, fruit, insects, dead meat and eventually, small fish.

Note: never feed piranhas on a staple diet of gold fish as they do not have suitable nutrient content.

Scientists have found the piranhas can smell and single drop of blood diluted in 190 liters (50 gallons) of water. Piranhas like tanks with a temperature of 24-28C (75-82 F) and at least a 50 gallon aquarium.